The Ultimate Guide To Living In & Moving To Ammon, ID

It’s not every day that you find a city in Idaho with two major universities, an award-winning arts center and museum, and a bustling downtown. But Ammon is just such a place.

Dubbed "The City Where Tomorrow Begins", Ammon is home to about 16,000 residents. It has grown by leaps and bounds in the last decade or so and now provides its citizens with all the amenities of larger cities while still maintaining its small-town charm. It also offers abundant recreational opportunities for young families who want to live close to nature without moving too far away from civilization.

In this guide we will look at all one would need to know about living in and moving to Ammon, Idaho.

Founded by members of The Church of Jesus Christ of Latter-day Saints, Ammon was originally called South Iona as the area was dependent on a branch of the church in Iona, Idaho.

When the church was officially made a ward in 1889, the then Bishop, Arthur M. Rawson saw it fitting to change the name and chose Ammon after a figure in the Latter-day Saints book of scripture, Book of Mormon. This became official in 1893.

Later, in 1905, Ammon was officially incorporated as a city and in 1963, under Idaho Law, became a Second Class city. Ammon's population remained rather steady until about 1940 when housing developments aided in the city's growth. In the 1990's building really started booming in both the residential and commercial parts of the city making Ammon one of the fastest-growing cities in the state of Idaho from 2000 to 2010.

Prices for homes in Ammon vary greatly and depend on a number of factors: age of the home, size, location, and condition. The city is filled with both well-established neighborhoods as well as newly developing subdivisions.

View All Homes For Sale in Ammon, Idaho >>>

When considering moving to Ammon, ID, especially if you have or are planning to have children, schooling is likely to be one of your top priorities. The city is served by the Bonneville Joint School District which operates 19 schools and educates roughly 11,000 students a year making it the fifth-largest by enrollment in the state of Idaho.

The district has consistently been ranked as one of the best in the state and has received awards for its music and arts programs.

Public schools located in Ammon include:

Things To Do in Ammon

The city of Ammon is filled with things to do for people of all ages. The following are just a few of the many options:

The Museum of Idaho is a great option for those who enjoy history and culture. The museum has been named one of the top 50 museums by USA Today and offers visitors an up-close view of fossils from Eastern Idaho's prehistory as well as a variety of exhibits on the area's natural history. Technically located in Idaho Falls, residents of Ammon are just minutes away from this historical gem.

Located in the heart of Ammon, McCowin Park is perfect for the entire family. The area features walking trails, a walking bridge, an outdoor amphitheater, playgrounds and more. It's open year-round and is free to the public!

Those moving to Ammon, ID who are fans of golf will enjoy the city's proximity to the Sand Creek Golf Course. The course is an 18-hole championship-level course that offers players a variety of challenges as they make their way through the picturesque landscape.

The Splashpad and Swimming Pool:

If you're moving to Ammon in the summer, don't forget to take advantage of the city's water features! The Ammon City Swimming Pool and Splashpad are located at McCowin Park and offer residents a great way to cool off during the summer months.

Just a few minutes down the road from Ammon is Idaho Falls, home to the Idaho Falls Zoo. The zoo is home to a variety of animals from around the world and offers visitors a chance to learn about and interact with a variety of creatures. 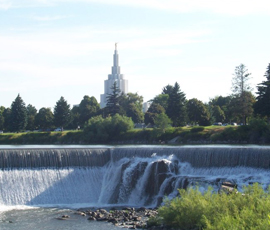 12 Things To Know About Moving To Idaho Falls

One of the best things about moving to any new place is getting to try out all of the new restaurants! Luckily, Ammon has a variety of eateries to choose from.

Some of the most popular restaurants in Ammon include:

Cast Iron on 17th boasts a casual atmosphere and a wide variety of American cuisine. With a rotating menu, Cast Iron is a great place to visit again and again.

If you're looking for Mexican food, Los Dos Amigos is the place for you. The restaurant offers a wide variety of traditional favorites as well as unique dishes that will have you coming back for more.

Love Korean food? You'll love The Porky Korean. This is the only restaurant of its kind in southeastern Idaho and offers up both traditional, classic dishes as well as some unique, creative options.

One of the great things about moving to a small town is that you get to know your local businesses. Moving to Ammon is no exception. The city is filled with both unique, locally owned and operated shops as well as convenient big-box stores to suit all needs.

A large portion of Ammon's commercial area is located along the city's west border. Here shoppers can find options such as:

Originally opened in 1984, Grand Teton Mall is home to a wide variety of retailers, shops and services. Some of the stores found in the mall include Best Buy, Barnes & Noble, JCPenney, Dillards, Old Navy, and Shoe Depot.

Slightly to the south of the mall are further shopping options which include Kohl's, Target, T.J. Maxx and more. Mixed throughout these large stores are banks, gas stations, restaurants, medical offices, and even a hospital.

If you're moving to Ammon, ID and want a small town feel with big city amenities close by, then this is the place for you. With everything from museums to golf courses, schools and restaurants- there's something for everyone in this picturesque area of Eastern Idaho.

Why Use Keller Williams Realty East Idaho for your Move to Ammon, ID?

When moving to a new community, it's important to have a real estate agent you can trust. Ammon is a growing city and moving here means moving into a new home that needs the perfect family or professional touch.

That's where Keller Williams Realty East Idaho comes in. With years of combined experience, our team has the resources and knowledge you need to make moving day as smooth as possible.

So if you're moving to Ammon, ID or anywhere in East Idaho, call our team today! We can't wait to start working for you.

A local Ammon, ID real estate agent is ready to help you find your dream home!